Trump stood on a balcony. So did Mussolini. But so what?

I had to do this quick post in response to some Leftist insanity on Twitter right now. As you may be aware, Democrats and their "progressive" allies are bitterly disappointed that President Trump did not die from his brief bout of COVID-19. And it's making them crazier than usual. 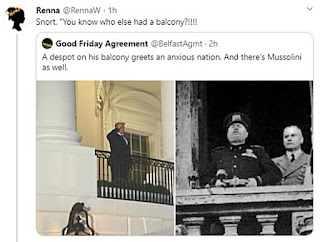 The latest, today, comes from the Lefties in response to Pres. Trump having the nerve to stand on a White House balcony and (gasp!) salute the American people.

In the sick, bizarro minds of those people, that make him evil.

After four years of calling him "Orange Cheeto," they've taken a quick sideroad to, today, liken him to Benito Mussolini, the fascist dictator of Italy during WWII.

Why Mussolini, you may ask? Simple. Some feeble-minded liberals found photos of Mussolini speaking from various balconies. 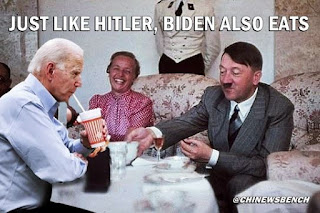 So naturally, in their universe, this makes him just like Mussolini, a dictator, a strong man. Only a mentally ill person, or one with an IQ below 80, could believe that correlation. But I think I just described millions of Democrat voters. No?In the past, I (and others) have responded to absurd comparisons of Trump to Hitler by mockingly pointing out that both Hitler and Biden ate food, therefore they're the same in mind and spirit.
That's ridiculous, of course, and it was meant to poke fun at the idiocy of the Left's thinking.

But here we are today, with the Left actually making a comparison just as absurd and believing it in their hollow hearts.

The difference between them comparing Trump to Mussolini because both have stood on balconies and my Hitler-food-Obama satire is simple: The Left actually believes this nonsense.

I saw Obama on the balcony and thought you're an idiot. pic.twitter.com/CyMeFLzIiq

They can be, dummy. pic.twitter.com/HCg4CJCNXi