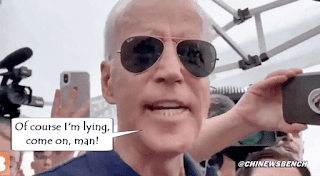 Joe Biden - and thousands upon thousands of others on the Left - keep repeating a heinous lie about President Donald Trump.

Never missing a chance to call someone a racist, even if they are not, Biden and his Democrat Party comrades have continued to spread the falsehood that Trump called the neo-Nazis and White supremacists in the Charlottesville clashes "very fine people."

In fact, Trump specifically and explicitly said that they "should be condemned totally."

Despite the easy availability of video showing Trump saying exactly that, ignorant Leftists swallow the lie that is deliberately spread by Democrat politicians - even  by those who know that it's false.

WATCH and hear for yourself what Trump really said:

People wanted this video with no music. Here ya go.

Joe Biden lying, stirring division, because he has nothing else to offer. Please share. pic.twitter.com/1FrMXggQXV
— Michael Moore (@mbracemoore) August 26, 2020

"The veins bulging from his head?" What?

Despite this, liberal politicians and ordinary everyday liberal idiots have embraced the falsehood and continue to spread it to other, equally stupid liberals. And of course, much of the media is complicit. 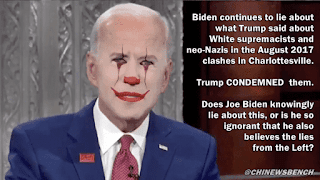 In fact, many media outlets let Joe Biden get away with launching his presidential campaign with the Charlottesville lie as a supporting pillar.

A year and a half after the Charlottesville clashes, and after Trump condemned the neo-Nazis and White supremacists, Biden continues with the lie.


....former Vice President Joe Biden announced his run for the 2020 Democratic presidential nomination. He came out of the gate hard, citing the tragic August 2017 clash at Emancipation Park in Charlottesville between right- and left-wing demonstrators that left three dead and 38 injured. “That’s when we heard the words from the president of the United States that stunned the world and shocked the conscience of this nation,” Biden intoned, that there were “some very fine people on both sides.”  Biden said that Trump “assigned a moral equivalence between those spreading hate and those with the courage to stand against it,” and that in this moment Biden concluded “we are in a battle for the soul of the nation.”

The problem with Biden's statement, as that USA Today article points out, is this:


Taken out of context, the “fine people” quote does look troubling, but Trump’s critics never tell the whole truth. The statement came from an August 15, 2017 press availability, in which the president was engaged in a spirited discussion with journalists over the broader implications of the Charlottesville street clash. Check the transcript.

The relevant portion of the transcript is faithfully reproduced in the Robbins column, which ends with this:


For Joe Biden in particular, exploiting the Charlottesville myth is a way to head-off other racially-charged issues, like his Anita Hill problem, his 1994 crime bill problem, his school desegregation problem, and his simply being an old white guy problem.

But Democrats would do better to focus on countering the rising tide of antisemitism in their own ranks rather than repeating the false and defamatory Charlottesville narrative.

Otherwise they will be losing the votes of a lot of very fine people.

Biden is a serial liar, and the nation knew this decades ago. Want proof? Watch this:


I'll leave you with this video from ABC News, in which Trump (at 1:18) makes it very clear that he does not approve of the behavior of White supremacists or neo-Nazis: