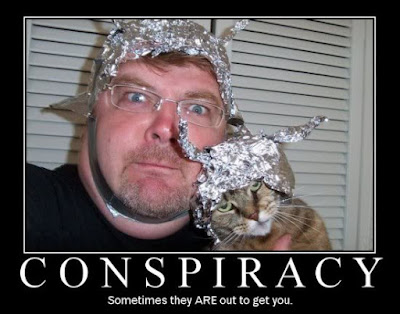 March 1, 2012 - Intriguing questions, hinting at murder and conspiracy, are being asked about the untimely death of Andrew Breitbart, 43. The citizen journalist and hero of the Tea Party movement and conservatives across America died early this morning just after midnight in Los Angeles.

Update: Alex Jones and Jerome Corsi are busy with their paranoia-for-profit fantasies. See what they're up to, and why they cannot be trusted.

Within minutes of the news of Breitbart’s death, rumors began to fly that he was murdered. The insta-conspiracy theories are still running rampant on Twitter.

The single most popular theory, it seems, is that Obama wanted Breitbart dead because of a speech he made at CPAC last month. In that speech (video below) Breitbart said that he had videos of Obama in college in which, allegedly, Obama participates in plotting the destruction of the United States.

As of this moment, no autopsy has been performed on Andrew Breitbart's body yet (the LA County medical examiner says they might examine him on March 2).

Curiously, the mainstream media  all reported that Breitbart died of natural causes, and it's been noted that he had a history of heart problems.

Some people find this strange: How could the mainstream media, within a couple of hours of his death, claim to know that Breitbart died of "natural" causes when the Los Angeles County medical examiner hasn't even come to that conclusion yet?

Breitbart, beloved by many conservatives, was vilified and hated by liberals. Some, I have no doubt, not merely wanted him dead but would have been willing to kill him.  Many liberals, as we know, have no reservations about publicly calling for the death of those who disagree with them: Witness the thousands of incidents of liberals at anti-war protest who held signs that called for the deaths of Pres. George W. Bush, Vice President Dick Cheney, and other government officials. Most, of course, didn't really mean it, but some probably did. More than once I heard liberals say that they would gladly put a bullet in to Bush or Cheney. They were serious, and they were not rare exceptions.

I am reluctant to jump aboard the Breitbart Murder Conspiracy Crazy Train just yet, but I am holding a ticket in my back pocket just in case. We don't even have the official coroner's report yet. But if he was murdered, the trail would probably have been made cold before the deed was done.

IF he was murdered, it was likely done by very powerful people (need I name names?) who have the ability to control police departments and criminal investigations. Before the hit occurred, they would likely have made sure that the minimum number of people needed were involved.

Some of those who would liked to have killed Andrew Breitbart, say some, currently occupy the White House, say the conspiracy people. (Again, I am not saying that Andrew Breitbart was murdered.)

I'm willing for the moment to believe that a hardworking, slightly overweight guy in his 40's could have had a fatal heart attack.

However, let's humor the conspiracy crowd for a moment and consider their suspicions that Breitbart was assassinated - most likely by a frightened and vengeful Obama Administration.

Administration officials - who control the Justice Department, FBI, CIA and more - have the the ability to kill somebody and make it look like a heart attack. The possibility of homicide by induced heart attack is examined in an article at VeteransToday.com:

A special type of poison developed for the CIA induces a heart attack and leaves no trace of any external influence unless an autopsy is conducted to check for this particular poison. The CIA revealed this poison in various accounts in the early 1970s. The CIA even revealed the weapon that fired those darts that induces a heart attack at a congressional hearing. The dart from this secret CIA weapon can penetrate clothing and leave nothing but a tiny red dot on the skin. More at vertanstoday.com...

It is not unrealistic, then, to say that murder by heart attack is possible. But what about motive? Did the Obama Administration have motivation

Breitbart evoked the same passionate hatred from leftists and liberals as did Bush and Cheney. More, possibly. Today, many of liberals are opening rejoicing over the death of their Andrew Breitbart. Many, not merely a few, are expressing their vile joy over the death of a father, a patriot, a man, a human being. Sadly, this does not surprise those of us on the Right: We've seen this disgusting behavior by libs many times in the past. These are twisted individuals whose political philosophy stems entirely from emotional retardation and envy of those you perceive as better or luckier.

While not all liberals behave this way, a disturbingly large percentage of them do. The Left is the side of that mocks tragedy and cheers the death of political opponents, especially (yes, especially) when they are fellow Americans. Don't take my word for it, though. Scan the Web. Listen to liberals as they laugh about Breitbart's death in the bars this week and in the weeks to come.

Read today’s putrid piece at RollingStone.com by sewer vermin Matt Taibbi, with the unbelieveably cold headline of “Andrew Breitbart: Death of a Douche.” The piece began with this dose of liberal enlightenment:


“So Andrew Breitbart is dead. Here’s what I have to say to that, and I’m sure Breitbart himself would have respected this reaction: Good! F--- him. I couldn’t be happier that he’s dead.”

To wrap up his garbage piece, Taibbi wrote this:


“But he also had enough of a sense of humor to appreciate why someone like me shouldn’t bother to pretend I’m sad he’s dead. He wouldn’t, in my place. So to use one of his favorite words: Good riddance, c--ks--ker.* Don’t let the door hit you on the way out.”  That asterisk after “c--ks--ker” is explained by Taibbi this way: “See the following Breitbart quote: “I like to call someone a raving c--t every now and then, when it’s appropriate, for effect... ‘You cocksucker.’ I love that kind of language.”

Taibbi is apparently incapable of distinguishing between having the courage to insult a living person to their face, as Breitbart did, and cowardly calling a freshly dead person such names as Taibbi did in his shameful piece.

The conspiracy theories will not die, I venture to say. Years from now, you will encounter people who will insist that Barack Obama had Andrew Breitbart murdered.