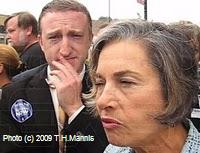 September, 2009 - Hey, I'm just asking. Had to, after getting a hot email from a friend alerting me to this developing story about the Democrat Congresswoman from Illinois. The basics, with emphasis added:

Referring to The American Conservative, the Turkey-based Bugun website reported that a Turkish female spy struck up lesbian relations with Democratic Congresswoman Jan Schakowsky, which enabled the gent [???] to obtain classified information and prevent the adoption of a bill on the Armenian Genocide by the U.S. Congress. Sibel Edmonds, a former FBI translator and the founder of the National Security Whistleblowers Coalition told the magazine that Democratic Congresswoman Jan Schakowsky was targeted by the Turks who compromised her with a Turkish female spy who seduced the bi-sexual and married Schakowsky. Schakowsky's townhouse had been bugged with cameras and microphones to capture the sex acts to later blackmail her. (Source: News.am)
Note that this is - at this point - conjecture. Brad Friedman talked to Schakowsky's office recently. He filed this report on Sept. 22 at web site "The Brad Blog" (emphasis added):

Schakowsky's communications director, Trevor Kincaid, sent us a formal response to the allegations about her, as published as part of the AmCon cover story out today.

In the response, Kincaid describes the claims made about the Congresswoman in the interview by former CIA officer Phil Giraldi, as a "hit piece" and a "complete fantasy; cut from the same cloth as the stories by 'birthers' that President Obama is not an American citizen."

I don't know if Schakowsky ate the strange fruit or not, but it seems we've heard "hit piece" and "complete fantasy" defenses from the likes of later-found-guilty Democrats so often in the past that Schakowsky's whining seems shallow and insincere. Just my opinion, but keep in mind that she and aide Kincade are dismissing the charges of Sibel Edmonds, a highly respected whistleblower.

Edmonds founded National Security Whistleblowers Coalition in 2004, and has gone after Republicans and Democrats alike.

Schakowsky is doing herself no favors by dissing Edmonds. Here's what Edmonds told The American Conservative in an interview for their Nov. 1 issue (emphasis added): 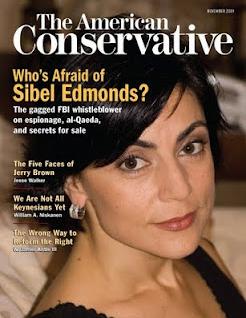 Turkish agents started gathering information on her, and they found out that she was bisexual. So a Turkish agent struck up a relationship with her. When Jan Schakowsky’s mother died, the Turkish woman went to the funeral, hoping to exploit her vulnerability.

They later were intimate in Schakowsky’s townhouse, which had been set up with recording devices and hidden cameras. They needed Schakowsky and her husband Robert Creamer to perform certain illegal operational facilitations for them in Illinois. They already had [Dennis] Hastert, the mayor, and several other Illinois state senators involved. I don’t know if Congresswoman Schakowsky ever was actually blackmailed or did anything for the Turkish woman.

Notice the reference to Dennis Hastert, a big Republican and former Speaker of the House of Representatives. Do Edmonds's accusations, involving more people than just Schakowsky, sound like a political witch hunt to you? It doesn't seem that way to me, but count on the spin to ramp up to hyperbolic speed over the next week.

IF Schakowsky had an affair, that would make her an adultress. That's a bad thing. She's married to Robert Creamer, a convicted felon. (That's also a bad thing.) If the charges are true about Schakowsky revealing classified information to a spy, could that she eventually be tried and, if found guilty, imprisoned? If she did get it on with a female spy, was Jan on top or on the bottom?