VILLAGE NORTH THEATER TO BE EVICTED 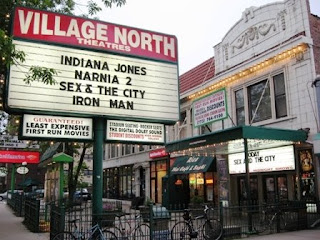 A beloved institution of Rogers Park will be evicted from its home at 6740 N. Sheridan Road. The two-story building also has a Starbucks coffee shop, a Thai restaurant and a Bank of American ATM center. The top floor of the building has been vacant for years.

The meeting took place this evening at 7:00 p.m., at Loyola University's Mertz Hall.

Alderman Joe Moore, 49th Ward, let it slip on both his web site and at tonight's public meeting that ADF Capital has an eviction order against the owners of the Village North theater. According to Moore's web site, Anthony Fox of ADF "purchased the property last year and plans extensive interior and exterior renovations. He is evicting the current owner of the Village North Theater, but hopes to keep the theater open after extensive renovations."

While Moore was introducing Mr. Fox (photo, right) to the audience of about 20 people, he mentioned in passing that there is an eviction order pending against Village North theater. Mr. Fox said that "the judge would not be happy" if that was discussed publicly, and the the subject was dropped.

The renovations will make use of $200,000 in Tax Increment Finance (TIF) District funding. Mr. Fox noted that the TIF money would be used to replace the crumbling terra cotta facade on the building with a concrete-glass compound "that looks exactly like the original terra cotta."

The TIF referred to is the Devon-Sheridan TIF district.

Mr. Fox also said that the interior of the building would not be renovated, but added that the space now occupied by the Village North theater is being considered for use as a live entertainment venue, possibly with a future liquor license.

Andy McGhee, partner in the still-developing Morse Theatre at Morse and Wayne, praised the use of TIF money for the replacement of the terra cotta.

"I would usually be against using TIF money for something like this," Mr. McGhee said. "I like TIF money to be used for really big projects. But this is a good use. Kudos to you," he told Mr. Fox.

Several neighbors in attendance asked whether this was the most appropriate use of TIF money. Mr. Fox cited a DevCorp North paper that claims that more than $150 million per year are lost to Rogers Park because people shop outside of it. Mr. Fox said that a beautified facade on the building at 6740 N. Sheridan Road would encourage more people to shop in Rogers Park. (He did not say how replacing some terra cotta would make Morse Avenue any more desirable or any safer.)